We've caught up on publishing the Organ Donor software to our GitHub project. Not only have we updated the Organelle software to the latest version as of our most recent deployment at the San Diego Maker Faire, but we've also released the Arduino console software for both versions of the Opus 1 console, capturing all the deployed versions back to the beginning.
Posted by Unknown at 2:10 AM No comments:

Thanks to Organ Donor Richard, we now have a spiffy kiosk for future work!

Check out this pdf of the product:

Richard spotted it on Craigslist, and we earned one of the two kiosks based on the impression given by our website. :+)

Can't wait to fill it with fun interactive features!
Posted by Michelle at 4:58 PM No comments:

This group picked 350 things to honor at Burning Man, and Organ Donor was on the list! 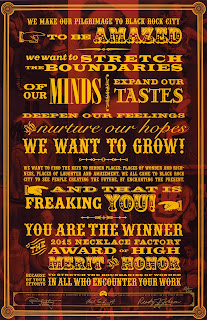 Views from the Balcony

Here are some photos of Organ Donor at the San Diego Maker Faire 2015 in the Natural History Museum in Balboa Park, taken from the balconies above the main show floor. This is an angle we rarely get to see! These were taken on the rainy Sunday morning, when the crowds were thin. 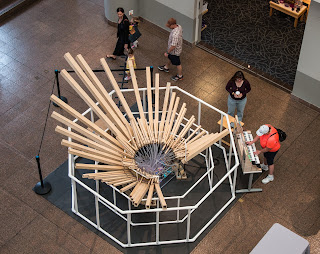 We were asked to keep the aisles clear, so all the long pipes were oriented in the same direction, keeping the layout more compact than usual. This looks a lot like one of our earliest concept drawings of how the pipes would be arranged. 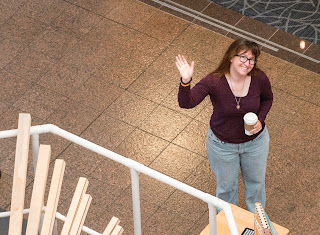 The show floor at the Nat included the luxury of a small cafe, with coffee. 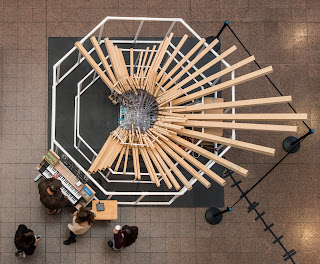 Museums need to have crowd-control stanchions in stock. Here they are keeping people from walking into the long pipes. The railroad track at the lower right is our AC power cord gaffer-taped to the floor. On the small table next to the console you can see the Adafruit UNTZtrument sequencer, connected to one of the four new external MIDI ports on the Organelle. 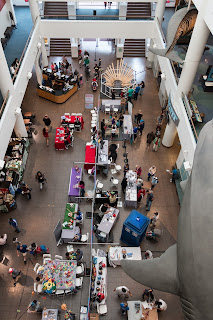 Here is most of the show floor in the central atrium of the museum, featuring lots of other booths on the zone theme of "Families, Kids, Fun!" This is only a fraction of what was available in the zone (that is, in the Natural History Museum), and it was only one of fourteen zones scattered throughout the park. Organ Donor doesn't look quite so big in this context. 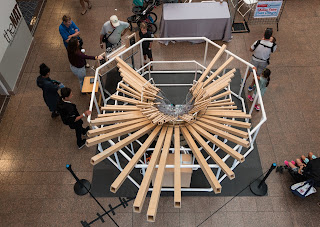 For this deployment we added a 12 foot square patch of padded flooring to our bag of tricks, based on experience with flooring provided for us at the San Diego County Fair. It protects the Museum's floor, but mainly it makes setup and teardown much easier on our knees. 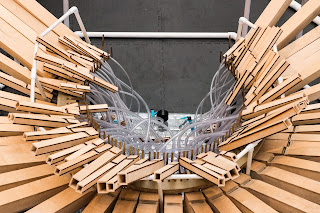 We've also learned a thing or two about getting all this tubing hooked up. Now we sort the tubing by length first, and try to use the shorter tubes at the back of the windchest. This makes for quicker setup and a more orderly result. We set up in record time for this deployment: Friday from 6:30pm to 11pm, and Saturday morning from 8:00am to 9:30am, for a total of about six hours, some of which was spent waiting for the dinosaurs to be moved out of the way.

Posted by Unknown at 9:10 AM No comments:

We got some great press! Sol Diego's Organ Donor made the top 10 on Make Magazine for what to see at the 2015 San Diego Maker Faire.


http://makezine.com/2015/10/02/bots-flames-battleships-converge-maker-faire-san-diego/
Posted by Michelle at 11:38 AM No comments:

Come see us and dozens of other amazing and inspirational projects!
Posted by Michelle at 9:55 AM No comments: