Organ Donor Goes to the Fair and Finds it's Fantastic

The San Diego County Fair runs from 5 June – 5 July 2015, and is expected to draw nearly a million and a half visitors. Like Burning Man, the fair represents drastically different things to different people. Unlike Burning Man, it’s very commercial, very spectator-friendly, and while it may flirt with a PG rating, it’s almost entirely kid-friendly and carefully curated.

However, there are some surprising commonalities between Burning Man and The Fair. There are some excellent untapped opportunities for Burners to participate in The Fair, greatly increase our presence in the wider community, and substantially improve our art projects along the way.

The Fair aims to submerse you in whatever captures your attention. The Fair wants to subvert you from a spectator to an active and engaged participant. Preferably leading with your wallet, of course, but not necessarily. Organ Donor has found that The Fair really, really, really wants exhibitors, not just more customers. This is a huge opportunity for Sol Diego, and therefore all San Diego Burners.

Burning Man art projects are an excellent fit for The Fair. The Fair has facilities large enough to show off the biggest art cars. There is a car show at the Fair every year, right at the entrance, with fleets of cars that rotate daily through all sorts of car clubs. Why not a burner art car day at The Fair?

The Creative Youth Tent in the midfield is an enormous space. This year, 15,000 pieces of art will be displayed. These are pieces made by children. This is where Organ Donor will be playable from 5 June – 5 July. Imagine more interactive indoor style Burner exhibits in this space!

There are huge swathes of open space that could very well host large constructed projects, LED-art, fire art, or whatever we came up with. Performance pieces, games, puzzles, the list is literally endless. Any ideas that are “too late, too big, too hard” for 2015 Burning Man Midway could find an almost perfect fit in a real Midway at The Fair.

Participation in The Fair requires completion and installation months ahead of the typical Burner build rush in July and August. This requires a team to have their act together, logistics-wise, much earlier in the year. The benefits, however, are substantial.

First, the potential for publicity and recruiting is enormous. Imagine demonstrating a working project and being able to invite people to join Sol Diego.

Second, the ability to test-drive a new interactive art project with real people over a long period of time will provide the sort of feedback that you don’t want to wait for the playa to get. Imagine being able to include a fantastic new feature or shape or structure that simply wouldn’t have occurred to you otherwise, without people actually encountering your artwork in the wild. Since The Fair closes after the 4th of July, you would have July and August to upgrade or modify your project to make it substantially better for the Burn.

The schedule does have a downside. I mentioned already that Organ Donor wasn’t able to come to Figment this year because of the conflict between The Fair and Figment. While we might have been able to take Organ Donor down and moved to Figment, the odds of being able to easily get back in to The Fair to set back up were very long. They want exhibits to be completely ready to go, and stay as long as possible. Setting up Organ Donor is a long and messy process, so we chose to stay for the entire length of The Fair. This doesn’t have to be the case for a project that is smaller or easier to set up.

Brandie envisioned Sol Diego becoming something like the Flaming Lotus Girls, with their projects being installed as large, recognized, funded, public art works in and around the city of San Francisco. I don’t have any insight or connections with the city of San Diego, outside of the ones I have accidentally made from time to time, but my feeling is that we should probably follow the path of least resistance and go where we are wanted, first.

If, as Brandie described, the San Diego city public art people are hostile to burners or have already decided we’re just a bunch of flakes, or honestly think that community driven art is fundamentally lesser quality than their sculptures of awkwardly posed surfers, then so be it. We have paths available to us that lead not only to the playa, but also to the fairgrounds, Balboa Park, and friendly museum spaces. Following these paths and showing that we are not flakes and that our art is not of lesser quality, while having a total blast and making people happy, sounds like having our cake and eating it too.

What’s required to do this successfully? Planning. Financial support. Communications. Following through. Starting now to draw up ideas and fundraising for the efforts. It means we stop waiting for Burning Man org to get around to eventually telling us what they think we should do, and start picking our projects for ourselves, showing them to San Diego, and then taking them to The Burn.

Looking forward to 2016, I’d like to know how interested we are in recruiting, sponsoring, building, showing, and supporting burner art in community spaces like The Fair and Balboa Park?
Posted by Michelle at 9:19 AM No comments: 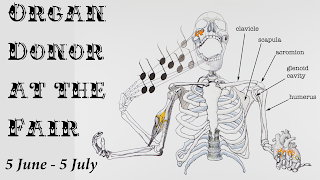 Posted by Michelle at 9:07 AM No comments:

What is a chord?

We've been working hard on the math that is underneath the surface of Organ Donor behavior. We're now beginning to grapple with pitches, or notes, instead of just pitch classes. A pitch class in western classical music is the name of one of the 12 semitones on the scale (C, F, G, etc).

So, up until now we've been working with 12-element vectors, where each position stands for a pitch class. A triad would be something like this:

The 1's indicate the presence of a note at that semitone. There are 12 semitones, and three of them are played.

But this doesn't tell you which octave the pitches are in.

With a small change, this information can be recorded in the vector.

Now, when handling this vector, I can make a list of which octaves the pitches are in. When I rearrange or invert the chord, I can make sure that the octave information survives.

Some transformations we don't yet have a method for preserving the information. For example, when getting the prime form of a chord, we are really calculating what class the chord falls into. The registration of the notes in the chords doesn't matter because prime form encompasses many variations of registration. Going from prime form to vectors means that when you generate the vectors, you are generating lists of pitch-class representations (the vector has all 1's), but not pitch representations (the vector has many numbers).

Something that occurred to us is that using 1's for generic presence of a pitch class gets confusing if you also take 1 to mean that it's from the lowest octave. This will be fixed, but we're not yet sure what the very best and most clever way forward is!

-Abraxas3d
Posted by Michelle at 4:14 PM No comments:

And Another Software Repository on GitHub

Greetings all! Here is the GitHub software repository for the user interface code for Organ Donor:

This is the code that runs on the "Organelle", which will be the console from which functions and basic operations can be controlled.

This is distinct from the console code, which is the code that makes sure that all the manuals (keyboards) are properly integrated into a single MIDI stream, and makes sure that not too many keys are pressed at once (which would pull too much current and pop a fuse).
Posted by Michelle at 10:20 AM No comments:

https://github.com/OrganDonor
Posted by Michelle at 8:14 PM No comments:

Email ThisBlogThis!Share to TwitterShare to FacebookShare to Pinterest
Labels: software

With this many valves needing replacement, the question was to make a new windchest or renovate the existing windchest?
The windchest was designed for the older style Petersen valves. However, the older Petersens and the new Petersens have different screw points. Also, the new Petersens have a claw that is supposed to grip into wood. Because we have an acrylic top, this claw can’t dig in to the material and therefore it prevents the valve from sitting flat on the acrylic. The solution we came up with during initial construction was to make an adapter plate. These adapter plates relocated the screw hole, lifted up the valve so the claw did not impact the surface, and sealed the old screw hole.
We decided to replace three entire rows of the old Petersens with new Petersens. We decided this for two reasons. Almost all the ciphers were on old Petersens that had pads that were much larger than the hole. The ideal pad size in only 0.25 of an inch larger than the hole. This creates higher effective pressure on the valve, which helps to prevent leaks. This strategy required taking out the old Petersens, making adapter plates for these valves, putting in the adapter plates, then putting in the new Petersens.
During initial research, it was misunderstood that the pad size needed to be at least 0.25 larger than the hole. It seemed like the larger the pad the better, however this did not turn out to be the case. The margin needs to be as close to an eighth of an inch all around in order to have the best seal. 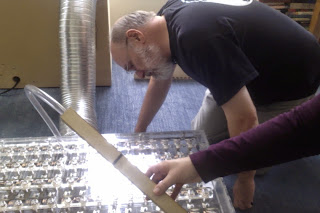 Posted by Michelle at 4:57 PM No comments: