Organ Donor is going to be presented at the Maker Faire meetup at High Tech High on 20 June. Here's the playlist for our 5 minute window :+)

Digging Into Questions About Entropy

These three curves are the bits of entropy per sliding window location in a work by Buxtehude (Prelude and Fugue in G Minor). The width of the window is set by the Kemeny constant of the MIDI track. There are three tracks: Swell, Great, and Pedal.
On a pipe organ, the main manual (keyboard) is called the Great. It is usually the bottom manual on two-manual instruments, or the middle manual on three-manual instruments. The upper manual is called the Swell. The Pedal is usually the very lowest notes in the piece. This is often played with the feet on the pedalboard.
Each of these tracks represents the music that would be played on the corresponding part of the instrument. Each part can be voiced on a completely separate rank of pipes, creating a layered sound.
In the MIDI version, each of the tracks is examined mathematically. First, a Markov chain is derived. This is a table that shows how likely it is for any particular note to follow a particular note. Starting with the first note and going all the way to the end, all combinations of the notes that follow the previous note are recorded, and then the probabilities calculated.
Next, the Kemeny Constant is found. This is the number of steps from a starting note to a randomly selected note chosen from the Markov chain's stationary distribution. No matter which starting note is selected from the piece, it takes about the same amount of steps to reach the randomly selected note from the piece. This number of steps is the width of our sliding window. The window function slides over the track. For each window, the entropy of the windowed sample is measured.
What we're looking for is places where the entropy changes dramatically. This would potentially indicate a local change in the entropy of the piece, which may indicate a compositional change or transition in the work. Identifying macro-phrases like this may be helpful in constructing algorithmic compositions that better emulate human composition.
As you can tell from the graph, the tracks do not line up. The pedal track is much shorter than the great, which is shorter than the swell. Therefore, the number of windows evaluated is not the same across the three tracks. This means that the samples are not aligned in time if they are simply listed along the horizontal axis. The samples need to be normalized for observed time. This (using the timestamps in the MIDI file to align the samples) is the next task in the design of this part of the software. 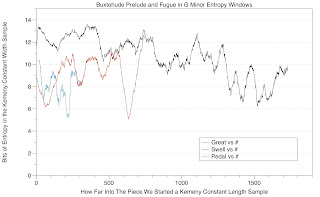 Posted by Michelle at 8:29 AM No comments:

We spent part of the day demonstrating and maintaining Organ Donor Opus 1 at the San Diego County Fair today.

We arrived to find a blown fuse! We replaced it and got Opus 1 back up and running at full capacity. The blown fuse took out one of the two controllers, so only half the pipes were playing. However, with all the settings usually selected, plenty of notes were filling in the sound.

We measured the console to make Version Two, which will include updated controls and a screen. The screen-equipped console is dubbed The Organelle. We're 3D printing the escutcheon and backplate for the screen over the next few days.

We disinfected the keys with clorox wipes and checked to make sure all the tubing was still in place.

More Fair next week! The Fair is closed Monday and Tuesday, but opens back up on Wednesday.

People love the organ, enjoy playing it, and some are actually studying the posters. See the Documents page for the current set of posters!

Posted by Michelle at 7:27 PM No comments:

Check out our pipe construction poster that we made for our exhibit at the 2015 San Diego County Fair!

Posted by Michelle at 9:36 AM No comments: