Here's what Organ Donor looked like loaded onto the freight elevator for setup at the Natural History Museum. 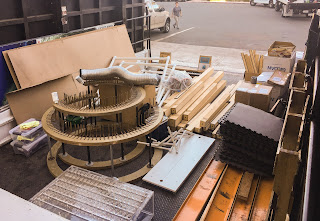 The experience at San Diego Maker Faire 2016 was outstanding in every way. Held at Balboa Park on 1-2 October 2016, Organ Donor Opus 1 was deployed int the Natural History Museum, aka theNAT.

Setup was Friday evening and went as flawlessly as it ever has. The new software that allows for much easier matching of note to valve offered the only real glitch. After three of the hundred twenty two pipes were taught, the cursor started moving all on its own all across the touchscreen. This made it impossible to assign the right pipe to the right valve.

After making sure the wireless mouse was off, the touchscreen connector was re-seated. The problem re-appeared after about twenty pipes. After pondering how what we were seeing could possibly happen, we remembered that the pitch wheels were programmed as cursor movers. The pitch wheels were slightly nudged just enough to key up the on-screen cursors. After the wheels were turned to a neutral location, the problem went away.

We arrived on Saturday and put in 8 hours of hosting. We met a large number of enthusiastic attendees and had so many wonderful conversations! Several important contacts were made, and we were visited by Maker Faire staff to check in at least twice.

Small children generally thin out in the afternoon. This means less banging on the keyboard and more accomplished playing. The only time we stop people from banging on the keyboard is if it's endangering the keyboards. People generally never get to touch a pipe organ. They're always off limits and set off in their own space, or hidden behind walls. Getting to create sound out of acoustic pipes, even if it's a bit dissonant, is a special experience that can spark an entire career. Our goal is to demystify the pipe organ, show what's always hidden away behind walls, explain how they work, and most importantly - let people play.

On Sunday, several extremely accomplished players graced our exhibit, and garnered extended and loud applause. I got a chance to walk around the faire and talk to other exhibitors and enjoy the atmosphere. The amateur radio exhibits were great and the food truck lines were slow.

The most time that Organ Donor wasn't being played was perhaps 45 seconds over the two days.

Late Sunday afternoon, we were visited by Rob Burkhead, our event coordinator, who awarded us the Maker Merit blue ribbon! He passed along extremely high praise for our exhibit, efforts, attitude, and effect. Sol Diego and all San Diego burners should be proud. Without your support and encouragement, Organ Donor wouldn't be at the Faire.

Several other large Faire exhibits were from the burner community, and several booths were staffed by burners. Burners volunteered to help run the event, and lots of burners attended.

If you want a wonderful experience where you can share your art directly with appreciative, inquisitive, positive, and interesting people, then give exhibiting at Maker Faire a chance. Non-commercial booths are free. The process is easy. The hardest part is figuring out parking and setup.

Tear-down was easy and Faire and museum staff were entirely supportive and helpful. I can't say enough good things about how the Natural History Museum helps exhibitors. They know it is a big effort to get your art or exhibit set up. They help you solve problems, get things done, and make you feel appreciated. Plus, you're hanging in the same room with a big old dinosaur skeleton.

The organization that puts Maker Faire on is called San Diego Makers Guild. They are in need of volunteers for planning, organizing, recruiting, volunteering, and staffing. Join up at http://www.sdmakersguild.org

There is tremendous continuing potential for rich and varied representation of all San Diego Burners at Maker Faire (as well as STEAM Maker Faire, San Diego County Fair, and many other events up and down the calendar). Performance art, music, LED arts and crafts, fashion, engineering, structural exhibits, fire art, art cars, engineering tricks, magic, improv - it's all welcome.

We are very much looking forward to coming back to Maker Faire with Organ Donor Opus 2! 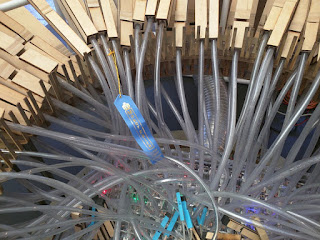 Posted by Michelle at 8:09 PM No comments:

We probably should have anticipated that putting a huge knob on the rotary switch would increase the mechanical stresses on the switch. The switch held up to a few hours of vigorous use by the many children at STEAM Maker Festival, and then started showing signs of failure. At one point I caught it acting as an 11-position rotary switch, instead of the 10-position switch it is supposed to be. The detents still lined up with the panel markings, but some (!) of the functions were offset by one position. Then, the end stop stopped working, leaving the knob free to go all the way around in one direction but not the other. Finally, the switch stopped working entirely, making no connection at any position.

We had to alter the software to ignore the rotary switch and stay in one mode (the keyboard visualization with waterfall effect) for the rest of the event.

Back in the lab, I pulled out the rotary switch for failure analysis. I found two problems, explaining the observed symptoms. The end stop relies on a round sheet metal plate with a tab bent down. That plate was bent, leaving the tab at an angle, so it could ride up over the stop in one direction but not the other. It's easy to see how the plate could get bent when the knob is slammed against the stop.  The other problem was that the moving contact that wipes over the ten fixed contacts was broken off. I found the contact loose in the housing.

I speculate that the stop plate bent first. The wiper contact then fell off the end of the fixed contacts into the gap between the first and tenth contact. When the knob was returned to a normal position, the wiper contact had to ride up onto the first or tenth fixed contact, which it was not designed to do. It was able to survive a few such transitions before breaking off.

So, we need to find a more robust rotary switch or else go back to a much smaller knob. 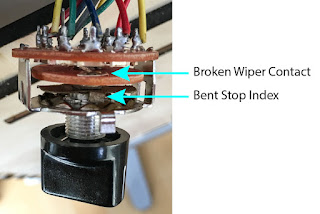 Organ Donor Opus 1.2 was set up in record time for the STEAM Maker Festival at the Del Mar Fairgrounds. We had just three hours on Friday and an hour and a half on Saturday morning before the event, for a total of 4.5 hours. The previous record was about 6 hours.

We were able to drive both vehicles right up to the installation site, so very little time was spent carrying parts back and forth. Plus, Richard was there to help.

Over the last few installations, Abraxas has developed a more systematic procedure for placing the air tubes between the wind chest and the pipes. She starts by sorting the tubes by length, and puts the shorter ones in the back. This results in a more orderly arrangement, and less struggle to make all the tubes reach.

Since the last installation, Paul has created a software assistant for configuring the system to match the installation of the tubes. For past installations, we have written the mapping from wind chest to pipes in a notebook, painstakingly checked it over manually for errors, and then manually pressed keys on the manuals to send the programming sequence to the MTP8 MIDI-to-parallel converters in the wind chest. Any error in the latter procedure meant starting over. Now, we press keys on the manuals to tell the software assistant about the mapping. Any duplicate entry is immediately detected and easily corrected. When all the data has been entered, sending the programming sequences to the MTP8s is fully automatic.

The photo shows the screen of the configuration assistant after all the mappings have been entered. I wanted to record the data before doing anything else, just in case there was a problem. 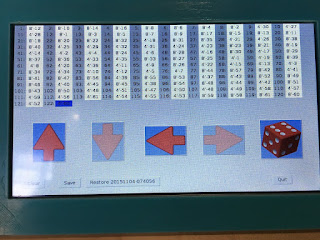 Organ Donor ready to pack up for STEAM Maker Festival


Organ Donor Opus 1 will be exhibited at STEAM Maker Festival at the Del Mar Fairgrounds on Saturday, December 5, 2015. On Thursday night, all the parts are staged to be packed into two vehicles for transport to the fairgrounds and assembly on Friday afternoon. Here's what that looks like.
Posted by Unknown at 11:00 PM No comments:

New knob for the Organelle

The knob we were able to find commercially was just too small and plain, so we designed and 3D-printed a much bolder knob.

The knob design is published on Thingiverse: http://www.thingiverse.com/thing:1160160 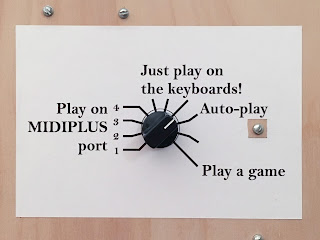 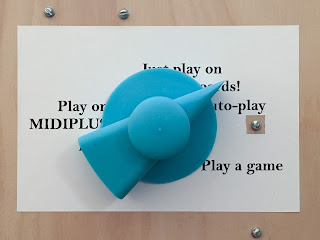 Obviously we need to redesign and reprint the panel markings to accommodate this much larger knob.

The knob was designed using OnShape.com, a new (still in beta) parametric 3D CAD system that's free to use with almost no restrictions. Worth checking out.
Posted by Unknown at 11:47 PM No comments:

We've caught up on publishing the Organ Donor software to our GitHub project. Not only have we updated the Organelle software to the latest version as of our most recent deployment at the San Diego Maker Faire, but we've also released the Arduino console software for both versions of the Opus 1 console, capturing all the deployed versions back to the beginning.
Posted by Unknown at 2:10 AM No comments: